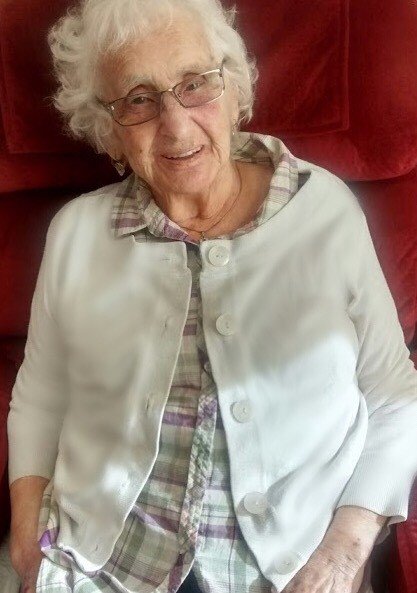 Please share a memory of Hazel to include in a keepsake book for family and friends.
View Tribute Book
STEEVES, Hazel Isabella Hazel Isabella (Mackay) Steeves, 89, of Sackville, NB, passed away peacefully in the arms of her daughter on Saturday, October 22 at the Windsor Elms Village in Falmouth, NS. Born and raised in Newcastle, NB, she was a daughter of the late William and Sarah (Urquhart) Mackay. She lived the majority of her adult life in Sackville, NB before joining her daughter, Shayla, in Nova Scotia in 2003. Hazel had a passion for writing stories and making creative quilts, was a school and kindergarten teacher, was the former deputy mayor of the Town of Sackville, NB, was an active UCW, IODE, Lioness, and Pythian Sister member, an avid community volunteer and ambassador, and was a long term member of the United Church of Canada. Hazel resided in the Windsor Elms Village since 2013, and was predeceased by her husband Aubrey 'the love of her life' in 1983. Her memory will live on and be cherished by her three children, Bill Steeves (Carol), Coldbrook, NS; Ian Steeves (Vicki), Sackville, NB; Shayla Steeves, Windsor, NS; sister, Mora Cairns (Bob), Mississauga, Ont.; four grandchildren, Jillian, Matthew (Wendy), Jami, and Violet; one great grandchild, Austin; as well as several nieces and nephews. A special thanks to the caring staff of the Windsor Elms Village. Arrangements have been entrusted to DeMont Family Funeral Home & Cremation Service, 419 Albert St., PO Box 981, Windsor, NS B0N 2T0 (902-798-8317), where a celebration of Hazel's life will take place 3 p.m. Tuesday, October 25, Rev. Bill Gibson officiating. Hazel will go home to be buried next to her husband in the Miramichi Cemetery on Old King George Highway in Miramichi, NB. On Thursday, October 27, family and friends will gather at 3 p.m. at Davidson's Funeral Home, 597 Old King George Hwy, Miramichi, NB E1V 1K3 (on the same property as Hazel's former family homestead), before proceeding to the cemetery for a graveside service. In Hazel's memory, a donation to the Alzheimer Society of Nova Scotia, 112-2719 Gladstone Street, Halifax, NS B3K 4W6, Caregivers Nova Scotia, 3433 Dutch Village Rd, Halifax, NS B3N 2R8 or a memorial of the donor's choice would be appreciated by the family. Messages of condolence may be sent to the family by visiting: www.demontfamilyfuneralhome.ca
Tuesday
25
October

Share Your Memory of
Hazel
Upload Your Memory View All Memories
Be the first to upload a memory!
Share A Memory
Send Flowers