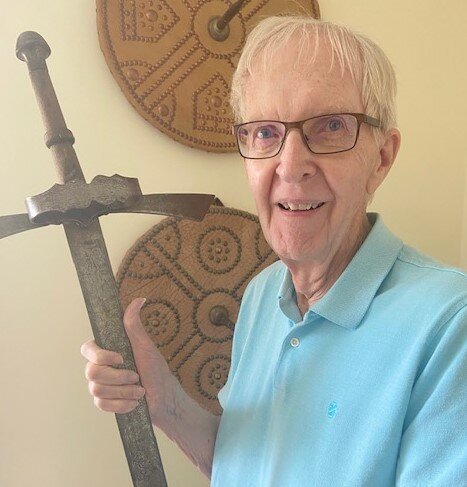 Please share a memory of George to include in a keepsake book for family and friends.
View Tribute Book

Age 79, of Windsor. It is with sadness we announce the passing of George on Tuesday, October 18, 2022 in Ivany Place, Bedford. Born in Newcastle, NB, he was the son of the late John Thomas and Janet Matheson (Dickson) Robertson.

George had a successful career in the Oil and Gas industry in Halifax. Upon retirement, he spent many hours reading, walking, exercising and researching his Scottish heritage. He also loved spending time with his family and was a great storyteller. He enjoyed traveling and visited many different countries. He especially enjoyed Scotland and had numerous trips there. One of the many highlights included walking The Rob Roy Way, 79 miles from Loch Lomond to Pitlochry. He hiked to the summit of Schiehallion, a Munro Mountain in the Scottish Highlands and also made it to the summit of Snowdon, the highest peak in Wales. He enjoyed skiing and had many ski vacations with his family and had perfected making it down the ski hill with zero turns.

Arrangements have been entrusted to DeMont Family Funeral Home & Cremation Service, 419 Albert St., Windsor (902-798-8317). There will be no visitation or funeral service at George’s request. At a later time, burial will be held in Newcastle, NB. Donations in memory of George may be made to the Canadian Cancer Society – Nova Scotia Division, 5826 South St, Halifax, NS, B3H 1S6. Messages of condolence may be sent to the family by visiting: www.demontfamilyfuneralhome.ca

Share Your Memory of
George
Upload Your Memory View All Memories
Be the first to upload a memory!
Share A Memory