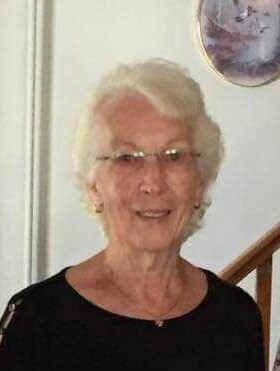 Please share a memory of Mona to include in a keepsake book for family and friends.
View Tribute Book

It is with great sadness we announce the passing of Mona Gould of Nicholsville, Kings Co., on Wednesday, July 13, 2022, in Valley Regional Hospital, Kentville. Born on November 22, 1940, she was a daughter of the late E. Doran and Dora (Joudrey) Lutz.

Mona learned early in life that it took hard work and dedication to succeed. As a young person she worked on a farm picking berries and produce. Her adventures later took her to Massachusetts where she worked as a cook on a farm. She also spent time employed at Western Kings Memorial Hospital, MT&T and later once her sons were older, Battery and Electric.

A talented woman, she enjoyed quilting and knitting sweaters, baby bonnets and clothes, some of which ended up at the IWK. She was also a founding member of the Nicholsville Rugrats Hooking Club. Mona was thought of very highly by her in-laws and family.

Besides her parents, she was predeceased by sisters, Violet Lutz and Annie Harding; brothers, Arthur, Earle, Vincent and Reginald.

Arrangements have been entrusted to DeMont Family Funeral Home & Cremation Service, 419 Albert St., Windsor (902-798-8317). There will be no visitation or funeral service by request. At a later time, burial will be held in Aylesford Union Cemetery. In lieu of flowers, donations in memory of Mona may be made to Valley Regional Hospital Foundation, 150 Exhibition St, Kentville, NS B4N 5E3 or Heart and Stroke Foundation of Nova Scotia, 5657 Spring Garden Rd, Halifax, NS B3J 3R4. Messages of condolence may be sent to the family by visiting: www.demontfamilyfuneralhome.ca

Share Your Memory of
Mona
Upload Your Memory View All Memories
Be the first to upload a memory!
Share A Memory