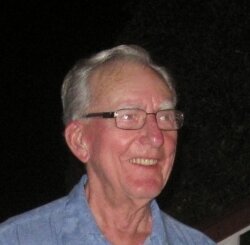 Age 97 of Halifax, passed away peacefully on Friday, July 1, 2022 in Camp Hill Veterans Memorial Building, QEII, Halifax. Born in Port Williams on November 14, 1924 he was a son of the late Ivan “Ray” and Lalia L. (Fraser) Fraser.

Bob was a long-time resident of Hantsport. He served overseas with the West Novies during the Second World War. He was an active 50-year member of Lucknow Branch No. 109, Royal Canadian Legion, Hantsport. He also received his 50-year jewel from Poyntz Lodge No. 44, A.F. & A.M., Hantsport, in 2013. Bob worked at Minas Basin Pulp and Power for 27 years before moving to Shelburne where he and Doris owned and operated The Wildwood Motel for a number of years, before retiring to East Uniacke. After 14 years of enjoying life at the lake they downsized to Bedford in 1998. Bob and Doris enjoyed their many travels, especially their trips to Florida. Bob loved music, notably a good sing song, cars of all kinds and on occasion, a nice drink of scotch!

Besides his parents, Bob was predeceased by brothers, Frankie (in childhood) and Ivan; sisters, Lois Jean (in infancy) and Velma Quinn.

Arrangements have been entrusted to DeMont Family Funeral Home & Cremation Service, 419 Albert St., Windsor (902-798-8317), where by request, a private invite only Masonic and Legion Tribute Service will be held at a later date. In lieu of flowers, donations in memory of Bob may be made to a charity of one’s choice. Messages of condolence may be sent to the family by visiting: www.demontfamilyfuneralhome.ca

Share Your Memory of
Robert
Upload Your Memory View All Memories
Be the first to upload a memory!
Share A Memory