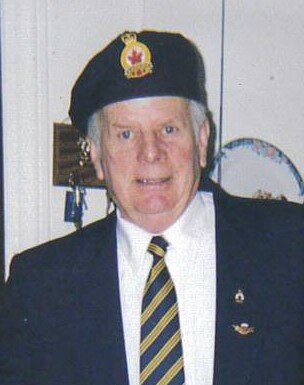 Please share a memory of Guy to include in a keepsake book for family and friends.
View Tribute Book

It is with great sorrow that we announce the passing of our dear husband, father and grandfather, Guy of Windsor. He passed away peacefully on Sunday, May 1, 2022 in the Halifax Infirmary Site, QEII, Halifax, surrounded by his loving family. Born on the Eastern Shore in Quoddy on December 22, 1930, he was a son of the late Clifford and Hazel (Kirker) Smith and he grew up in nearby Necum Teuch.

Guy joined the Canadian Armed Forces at an early age and was part of the Engineers Corps. With over 40 jumps he also earned his Paratrooper Wings and was extremely proud of this achievement and loved to tell stories of this time in his life. Following his service he sailed on the Canadian Icebreaker, Sir John A. MacDonald and on Imperial Oil ships, taking supplies as far north as the Arctic Circle before working in the mining industry. He then founded a construction company and did contract work exclusively for Bell Canada in the Sudbury, Ontario region. Upon retirement, he, his wife, Mary Alma and family moved back to their beloved Maritimes. They settled in Bathurst, New Brunswick, before relocating to Nova Scotia 10 years ago to be closer to family.

Always ready for an adventure, Guy put all he had into everything he did. He loved working, gardening and hunting. Ever resourceful, he was known to find unique solutions to any problem. He was strong physically but also a quiet and gentle man with a mischievous sense of humour.

Besides his parents, he was predeceased by his sister and brother-in-law, Joyce and Carl Oakes; brothers, Grant and Terry; brothers-in-law, Clary Wilbur and Stephen Morgan.

Arrangements have been entrusted to DeMont Family Funeral Home & Cremation Service, 419 Albert St., Windsor (902-798-8317). There will be a funeral service held at the Holy Family Catholic Church, 430 St Peter Ave., Bathurst, NB, at 2:00 p.m on Thursday, August 4, 2022. Donations in memory of Guy may be made to Heart and Stroke Foundation of Nova Scotia, 5657 Spring Garden Rd, Box 245, Halifax, NS B3J 3R4. Messages of condolence may be sent to the family by visiting: www.demontfamilyfuneralhome.ca

Share Your Memory of
Guy
Upload Your Memory View All Memories
Be the first to upload a memory!
Share A Memory
Send Flowers