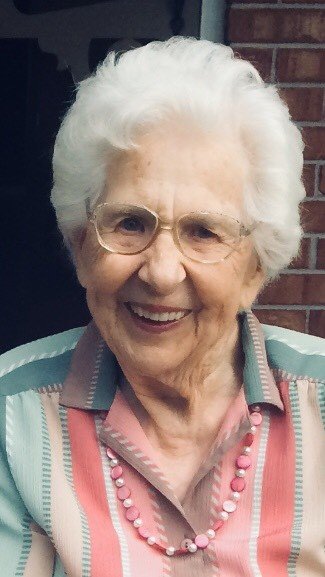 It is with great sadness we announce the passing of Margaret Romans, age 94 of Hants Border/Windsor, on December 10, 2018. Born in Woods Maternity Home, Port Williams on July 16, 1924, she was a daughter of the late William and Blanche (Benjamin) Allen of Melanson.

As a longtime resident of Hants Border, Marg was a member of Hantsport Baptist Church, a life member of the Hantsport Elders, a past member of Minas Waves Seniors Groups and the National Campers and Hikers Association. She spent many years as a camper, making many lifelong friends. Marg’s other interests were selling Avon and enjoying food. Her true passion was her family. Margaret was a friend to all and a friend of all.

Margaret was predeceased by her husband of 57 years, Gerald; daughter, Audrey; brothers, John and Jim.

Arrangements have been entrusted to DeMont Family Funeral Home & Cremation Service, 419 Albert St., Windsor (902-798-8317), where a funeral service celebrating Margaret’s life will be held 2 p.m. Tuesday, December 18, 2018, Rev. Gary Manthorne officiating. A reception will follow in the funeral home’s Elmcroft Reception Centre. Interment will be held at a later date in Gaspereau Cemetery, Gaspereau. Donations in memory of Margaret may be made to a charity of one’s choice. Messages of condolence may be sent to the family by visiting: www.demontfamilyfuneralhome.ca

Share Your Memory of
Margaret
Upload Your Memory View All Memories
Be the first to upload a memory!
Share A Memory
Send Flowers